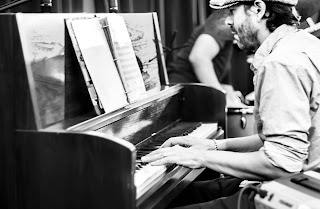 Nick Luca is a multi-instrumentalist musician, singer/songwriter/composer, music producer and audio engineer. He has toured throughout Europe, USA, Mexico, Canada and Australia with Iron and Wine, Calexico, John Doe (X) and his own band, Luca. As a session musician and audio engineer, Nick has credits on over 100 albums with artists such as Neko Case, DeVotchka, Robyn Hitchcock, Margaret Cho, M Ward, Darren Hanlon and many others.

Credits at All Music

Little Town, the remarkably moody and evocative first album by the Tucson-based Nick Luca Trio, evolved over a period of months during which Luca was working as an engineer by day and cutting tracks late at night after the recording studio's clients had packed up and gone home. “The nocturnal vibe of Little Town comes directly from working late nights, as you inevitably do in a studio,” the singer/songwriter/multi-instrumentalist says. “I'd be walking home at two in the morning through downtown Tucson, which is a much different city than it is during the day, with different characters and a different feeling, and the songs I was writing started to take on the sort of late-night thoughts that pass through your mind.”
At the time he was recording Little Town, Luca had just formed his trio with drummer Jim Kober and bassist Chris Giambelluca, but he'd been part of the Tucson music scene for some time and had worked with such local indie notables as Giant Sand and Calexico. He managed to coax Howe Gelb from the former group, and Joey Burns and John Convertino from the latter to add some instrumental color to Little Town. And it was Luca's association with those groups that helped him land his first record deal with Loose Records, a British label that released the album in 2003. A year later, it was picked up in America by Portland, Ore.-based Panther Fact Records, with three bonus tracks included. “Actually, we've developed quite a lot since we made that album,” Luca states. “Playing so much in clubs, we decided we had to kick it up a notch and play some rock 'n' roll, too.”
A musician from an early age, Luca is a New England native who got his start in recording by making tapes at home, and then more seriously at Clark University in Worcester, Mass., “which had a great little studio, with just a 4-track reel-to-reel and an Aries modular synth, which I've since taken from them because they were going to throw it away,” he says. “I found it in the trash when I went back to visit. When I was at Clark, it seemed like no one ever used the studio, so I said, ‘I'll use it!’ and they gave me a key. They had a Tascam board that needed some work, so I got some soldering chops from that. I was pretty much self-taught.”
When he wasn't in the studio, Luca was studying jazz guitar, music theory and composition and playing in various groups in the area. It was the University of Arizona's master's program in theory and composition that brought Luca to the Southwest in the early '90s; he liked it so much, he never left. “Everyone else was zipping off to New York and L.A. and San Francisco after college, and I decided, ‘I like this town. I think I'll hole up here.’ Tucson is a cool little place. There are lots of live music venues and tons of bands here, including a lot of really good bands that are doing pretty well.”
In college, Luca always had access to studios on campus, but once he was out on his own, it was a different story. “Then I ran into Craig Schumacher, who owns Wavelab [Studio]. He had a 2-inch MCI 16-track and a Soundcraft Spirit board, both of which he still has, though the 16-track has been expanded to a 24-track. Little Town was recorded on the 16-track, 15 ips; I wanted that real warm, rich tone.” Luca was hired on to work at the studio and he quickly established himself as a capable engineer, and later as a producer, working with the wide variety of music clients who come to Wavelab. During downtime and after hours, he'd work on his own music. Schumacher got into the act, too: He mixed Little Town.
Making the album, Luca availed himself of the studio's selection of outboard gear, its four very different Hammond organs and perfected a method of drum miking that leans heavily on overheads (Royer stereo ribbons) and a room mic (BLUE Cactus) to give his music the ambience he likes. While professing to being mainly an analog guy who likes cutting live with a group and then overdubbing — “It's best for our loosey-goosey, weirdo, vibe-y music” — Luca has started mixing some tracks to digital media. “It was inevitable,” he says with laugh.
At press time, there was no release date for the Trio's next album, titled You Win Again. Luca promises that it will “sound more like the way we are now, but still have some of the feeling that people like about Little Town.” There's no hurry. Little Town still has some life in it, and Luca still has his gig at the studio.
Email ThisBlogThis!Share to TwitterShare to FacebookShare to Pinterest
Home
Subscribe to: Posts (Atom)